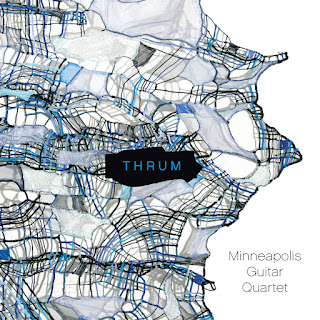 As omni-present as the guitar has been in the rock arena, it has on the whole had a much lesser presence in modern classical music, especially in multiple incarnations. A most pleasing exception to the general rule can be heard with the Minneapolis Guitar Quartet and their recent release THRUM (Innova 858).

They treat us therein to four compositions in a contemporary mode, all for the quartet. Not surprisingly the foursome play nylon-stringed acoustic models, and they do so with an excellent ensemble blend. For the final work on the program composer Gao Hong makes a guest appearance on the Chinese pipa.

The album gets off to a lively start with "Ghetto Strings" by Daniel Bernard Roumain. Each movement is named after a neighborhood, city or locale associated with the word "ghetto." So we have "Harlem, " "Liberty City," "Motor City," and "Haiti." The various movements combine a local style associated with that area and an overarching concern with repeating ostinatos, motive and/or "riffs," and a heightened rhythmic interaction between the four performers. It is music with an original bent, an identity that goes beyond locale and into a kind of meta-commentary.

The title work "THRUM" by David Evan Thomas builds on a contrapuntal texture and interesting, melodically distinctive part writing. This work especially reflects a contemporary take on idiomatic classical guitar soundings and becomes quite ravishing and inventive in the process.

Van Stiefel's "Cinema Castaneda" uses vivid colors to depict ten cinematic scenes, with the playing of the quartet rather spectacular in its varied evocations.

Finally Gao Hong's "Guangxi Impression" draws upon traditional Chinese music in the unusual combination of the four guitars and the pipa. Unconventional guitar articulations, knocking, pulling at strings, etc., contrast with the distinctive sound of the Chinese lute for an impressive final go-round.

The quartet leaves an excellent impression in the end. They are masters at forming a cohesive ensemble sound and bringing out sound-colors of a broad range. The emphasis throughout is to strive for a musical end, rather than to showcase technique per se. The composers and the quartet in this way unite for a program that goes a long way in establishing the ensemble as a premiere unit of its sort. May they long thrive, and may they continue to attract and discover contemporary compositions that do them the full justice that these works do. It's a delight to hear this album. I do hope that they get the broad recognition they deserve with this music.

Posted by Grego Applegate Edwards at 12:21 AM