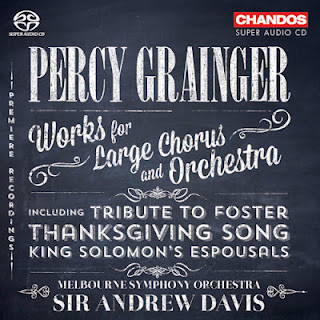 Not every composer of the 20th century occupies a secure and well-defined niche, of course. The composer Percy Grainger (1882-1961) is perhaps one whose reputation has yet to solidify, at least in my own head. He is a precursor to Britten in some ways, a sort of lesser Vaughan Williams, perhaps. Or is he? His piano music seems very English, folk-based at many points, somewhat impressionistic at times, creating a kind of down-home aura Anglophiles appreciate, but not always the general modern classical listener. Ironically however he was born in Australia, lived only 13 years in England, and spent the vast remainder of life in the United States, from 1914 on. So he isn't quite English in terms of pedigree, yet he seems to belong musically to that locale in spirit.

And what of his work with larger aggregations? I'll admit I have been until now rather ignorant of it. Now there's Sir Andrew Davis conducting the Melbourne Symphony Orchestra in a solid set of examples, Works for Large Chorus and Orchestra (Chandos).

These are premiere recordings (some of them anyway) and there are ten brief to mid-length compositions to be had. Certainly no fault can be found in the performing artists. They come through with very spirited and appealing renditions.

As for the music you once again get a get a good bit of folk-song adaptions, arrangements and compositions that reflect such roots. These have strong attraction for the most part, although I cannot say I was overly enamored with the piece based on "Camptown Races". There is a huzzah factor at work here that can be rousing. Get a large chorus and orchestra and give them something well put together and exciting, you get something that gives pleasure. Sometimes it's like hearing Ives without the Ivesian or Vaughan Williams without what made him quirkily himself. That isn't to say there aren't personal twists and turns of Graingerian personality in there, they just don't seem very out front.

In short I still don't find myself convinced that we have a titan of the century at work here. And perhaps that doesn't matter. We do have a very well performed sampling of his works for larger aggregates of singers and a full orchestra. We have time to listen, enjoy, and ultimately decide for ourselves about his music.

And so Davis and company have done us a great service, and at the same time given us a full CD of music that we can enjoy and explore.