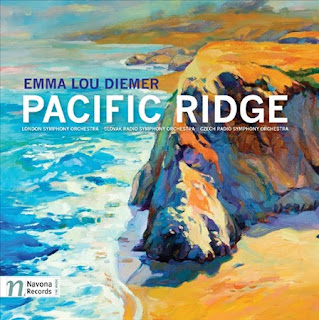 One thing you can count on with the Navona family of labels: they put out an ambitious monthly release schedule filled with the music of contemporary composers that may not be receiving a great deal of exposure, yet are often quite worthy of consideration.

One such release is Pacific Ridge (Navona 5898), a three work introduction to Emma Lou Diemer. An overture and two concertos for soloists and orchestra are on the program.

Ms. Diemer (b. 1927) resides in California, for that she may be envied given the recent winters and their chill factors here in the east. Her music has some of the spirit, panache and personalized Americana of Gershwin and Bernstein without any direct imitation. The three works are "Santa Barbara Overture" performed by the London Symphony under Brynmore Llewelyn Jones, "Concerto in One Movement for Marimba" with Nathan Daughtrey taking on the solo part and the Slovak Radio Orchestra under Joel Suben supplying the orchestral punch, and finally the half-hour "Concerto in One Movement for Piano" with Betty Oberacker at the pianoforte, accompanied by the Czech Radio Symphony, Vladimir Valek conducting.

All three works have single-movement dynamic thrust, a sure handling of the amassed musical forces, and the personal stamp of Ms. Diemer's musical vision. This is music of a directly communicative kind, modern in the expressive and harmonically evolved senses, a hint of jazziness at times, rhythmically active and filled with shifting moods as a seascape, turbulent, choppy, becalmed, freshet driven and rollingly consistent in turns.

The solo parts are well handled by the principals, the orchestral performances leave nothing to be desired, and the music has a solidly cosmopolitan appeal. Here's one that's easy to like.