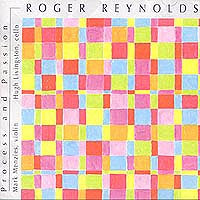 Roger Reynolds has been going about his art for many decades. By now he is one of the premiere living composers in the United States today. Through recordings he is especially known for chamber orchestra and vocal works. Not much of his more intimate chamber music has become widely available.

The gap has been nicely bridged in part lately by the three-work program on the CD Passion and Process (Pogus 21032-2). The three works are "Kokora" (1992) for violin, "Focus a beam, emptied of thinking, outward. . . " (1989) for cello, and "Process and Passion" (2002) for violin and cello. Performing the demanding parts are Mark Menzies, violin, and Hugh Livingston, cello.

There are two disks in the set. The first comprises the performances in standard two-channel sound; the second disk involves a contrasting mix into six channels, which are then binaurally converted so that the listener can hear a simulated six-way presentation (though this latter mix can be experienced properly only through headphones).

This is chamber music in the fully modern zone: wide intervalic leaps, complex abstracted rhythmic landscapes, widely expanded tonality or atonality, and a virtuoso set of string articulations. Maestros Menzies and Livingston do an admirable, rather extraordinary job with their parts. This is Roger Reynolds on the turf you would expect him to occupy. He does so quite successfully with three scores that take close listenings to appreciate but come through with memorable high modernist string music in an intimate setting.

I appreciate the binaural versions but am not one to listen for any length of time with headphones (unless I am walking to music), so the expanded sound staging was slightly lost on me in my restless run-through of that disk.

The music is demanding but ultimately very satisfying. It is in every way a welcome addition to the Reynolds discography and will only further enhance his already considerable reputation. Anyone in touch with the modernist style will no doubt find in these performances a kind of manna for their modern-hungry ears.