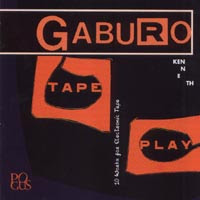 It could be said that the impact of the first two decades ('50s-'60s) of American electronic/electro-acoustic music has not been as strong as the work produced in Europe during that period. Sure, Babbit, Ussachevsky, Mimaroglu and a few other composers associated with the Columbia-Princeton Electronic Music Center and Subotnick out of San Francisco made a strong impression in their day and continue to be admired now. True also that Edgard Varese's brief but important foray into the field and John Cage's pioneering collages and subsequent work remain important influences on the avant garde scene. But there were many composers active then that are not as well-remembered now, many worthy of our attention.

Gaburo liked to mix comparatively unaltered instrumental and vocal sounds in with electronically generated ones. Most of the time he tended toward more of a "chamber" than an "orchestral" electronic palette. He had a sense of humor sometimes lacking in the electronic music of the period and a somewhat quirky sense of dramatics. All this combined served to distinguish him as somewhat untypical.

The ten works represented in the volume at hand are sequenced in more or less chronological order. The earliest works, some originally released on a Nonesuch LP at the time, have less of a virtuoso feel to them than some of the later works. They are perhaps a bit more conversational and slightly casual compared to what followed. "Fat Mille's Lament" (1965), for example, combines an altered vocal loop with clouds of rapid high-pitched glass-bell sounds, then takes a jazz orchestra snippet and modifies it by doubling for a moment, only to fade away to leave an open space that is again filled with a short reprise of the loop and cloud.

"Re-Run" (1983) uses rapid-fire melanges of single-timbred sounds. It's a good example of how later works seem a bit more developmental; they generate unified discourse from single-idea kernels much of the time, and may combine abstract spoken word dialogues with electronic soundscapes. You can hear this in "Mouth Piece II" (1992), or "Kyrie" (with Henri Chopin)(1974) and its familiar children's nonsense rhyme-song incanted in deadpanned seriousness while a mystical drone of sustained altered voices sounds in the background.

Kenneth Gaburo has a timeless presence in these works. The fact that he tended to avoid the sort of serial syntax in favor then and his attention to ambiance gives him a vibe more in common with the electro-acoustic music in vogue today than some of the more methodologically minded composers active at the time. And the music continues to hold fascination.

True, he may not be at the very pinnacle of achievement for his era. Nevertheless it is good to hear these pieces again and/or (at least for me, some) for the first time. They keep their interest and most certainly don't repeat themselves. He was ever imaginative and puckish. And perhaps easier than some composers of the day to grasp by those uninitiated in avant fare, since he tended not to seek out much in the way of strident dissonance or complex noise. Recommended, especially for the avant completist.

Posted by Grego Applegate Edwards at 12:12 AM