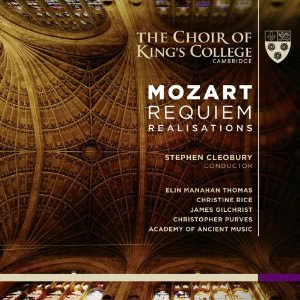 Mozart's Requiem has been the object of myth, of debate and of devoted admiration since he left it unfinished at his death. The completed version that has come down to us was extended and orchestrated by several hands, including his student Franz Xaver Sussmayr. Yet alternate realizations are always possible, since every movement at Mozart's death had degrees of completion and no hard and fast rule dictates exactly how it should be fleshed out.

The Choir of King's College, Cambridge, with soloists and the Academy of Ancient Music, all under the direction of Stephen Cleobury, have given us what you might call a critical edition CD (King's College KGS 0002): a fine performance of the Sussmayr version and then alternate versions of five of the movements as realized by various composer-musicologists. A second disk provides a fine audio documentary written by Mozart scholar Cliff Eisen, discussing the facts behind the work as it has come down to us, its antecedents, the mythology surrounding the work, its reception over time and what exactly has been involved in the various realizations. Musical examples make all quite reasonably plain and clear.

It all comes together in a SACD hybrid format, and the sound is remarkable in itself. The standard version as performed in the set is perhaps the loveliest I have had the pleasure to hear. There may be versions more stirring, more Beethovianly bombastic, but none more haunting. The choir is heavenly, the orchestra a bit smaller and less prominent than with the bombast editions, but as a result more subtle, and the soloists are top notch.

Having the five alternate realizations is revelatory and moving. Some movements are more dramatically transformed, others less obviously so, but all are very nice to have indeed. The documentary disk is a model of its kind, thorough, incisive and insightful.

In short this version is a must-have for anyone with more than a passing interest in Mozart's final work. Its haunting performance will transport you; its attention to critical detail will satisfy and educate you. Do not miss it.