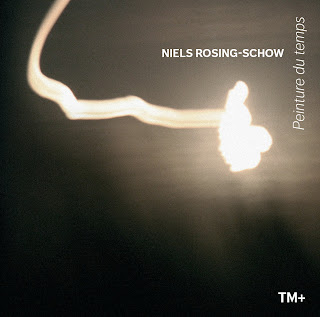 High modernist classical, as anyone who is reading this no doubt knows, is an achievement unprecedented in the history of music. Never before has there been such use of expanded and deconstructed tonality, rhythmic complexity and unusual sound color. Happily for those who love it, it is still very much with us.

A brand-new example that is as involved and intricate as any of it that has gone before is Niels Rosing-Schow's Peinture du temps (DaCapo 8.226557) which includes the title piece and four other works, played with dedication by the ensemble TM+ under the direction of Laurent Cuniot.

The size of the ensemble varies between an intimate duo setting of flute and cello for "Imprints of Time" to the fairly large chamber ensemble of "The Garden Behind the City." The pieces are mostly quite recent, ranging from a work composed in 1986 (and revised in 1997) to the nearly yesterday of 2010-11.

Rosing-Schow's music is complex, atonal or nearly so, rhythmically very active, pointillistic in its own way and quite dramatically conceived.

It's not a music that sounds at all derivative, but instead comes through in a voice that is quite original.

The music goes from architectural strength to strength with a logic of sequence which is apparent and a classical-modern sense of inevitability. Rosing-Schow is a composer of the first rank and ensemble TM+ gives his music an ideal realization. Recommended.