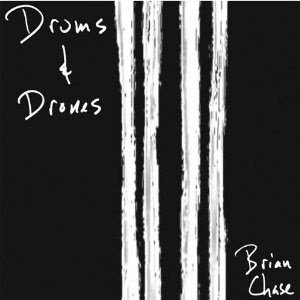 Like conceptual art and modern image art, the best avant garde works of music may not only provide a sound world of unusual dimensions and provenance, they also may make you think. Like a Zen rock garden, there are often a finite set of elements, perhaps in various states of transformation, and your experience of them is heightened by reflection on what you are hearing. The actual hearing, you may become aware, is a process, not at all-together synchronic singularity.

John Cage was a master of making you expand how you approached your sensuous world in this way. Dogs barking, ambient room noise, or any matter of elements Cage manipulated usually had a conceptual component that was more than it might initially appear.

Brian Chase and his work, as heard in Drums and Drones (Pogus 21070-2), has that about it. There are ten segments that flow together as different aspects of the overall matrix. Chase, drummer for the Yeah-Yeah-Yeahs, close-miked various drums tuned to specific pitches and then processed those tones through a computer and a set of loudspeakers.

The idea is to emphasize the sound and its segments of the overtone series through filtering (to explore just intonation in part) then to further subject those sounds when desired to transformations by causing and manipulating feedback drones that occur as the drum head interacts with the loudspeakers.

Each segment is its own sound universe, the drum being a carrier of percussive and sustained tone here but not as much of rhythm. The first disk is a CD containing the sound works only; the second disk is a DVD with the 10 segments augmented by corresponding abstract animations by Ursula Scherrer and Eric Z.

In the end you are led into contemplation of the sound of drums and the nature of that sound, what it is in microcosm and what it may be transformed into with electronic manipulation.

A single tone-sound with its overtone series is always a universe unto itself. The pieces expand our awareness of this inner world as they also provide a kind of fulcrum for meditation on the nature of sound. Or at least that's what I ended up experiencing.

The animations have a sameness-in-change that perfectly synchronizes with the sound-music. I found the color visuals a refreshing change after a number of studies in black and white. They certainly transfer in visual terms the ideation of the music.

The music takes some getting into and how much you like it may depend on how deeply you have delved into minimal avant garde and the abstract sound sculptures of works that have come before. Some may find it less "interesting" than what they are used to. Give the sound time to unfold and hear these segments a number of times and you will probably (like me) fall into the spell that the sounds cast over the sympathetic ear.

It's either remarkable or boring, depending on how much you put into it. So of course is a Zen rock garden. Brian Chase has created something unexpected, no matter how it affects you. That is far from easy in these times.