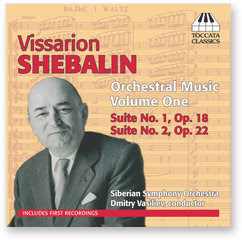 In the annals of 20th century composers Vissarion Shebalin (1902-63) does not fall towards the top of the well-known list. He was born in Siberia, got some attention and acclaim in Russia, was roundly condemned by the social realists in 1948 and had health problems for most of his later life. This may help to explain why he is not very well-known today in the States.

What it shows us is that Shebalin has some progressive traces in the earlier suite, not so much in the latter. He is a melodist of talent and an orchestrator who knew his craft. The first suite grabs me a bit more than the second, which seems a little more generic as a whole.

The Siberian Symphony Orchestra under Dmitry Vasiliev do a decent job with the music. If it doesn't do a great deal for me, I can only assume that this is not the place to start in appreciating his artistry. There are symphonies and other more serious works and I can assume we'll be hearing from Toccata Classics in the near future with more in the heavier vein.

It's nice enough and shows that Shebalin is no featherweight, but perhaps may not be essential to all but devoted Russophiles.