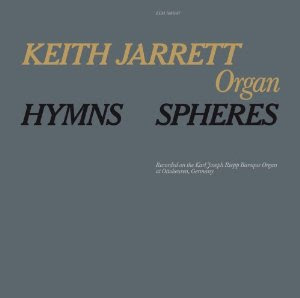 When Keith Jarrett recorded Hymns Spheres (ECM 1086/87 3716391) in 1976 on the Baroque Era Trinity Organ at the Benedictine Abbey Ottobeuren and it came out soon after, I bought it, appreciated it, but didn't think of what sort of ramifications it might have on the improvisation-classical nexus. In part that was because Keith was in such a creative phase and ECM was so prolific at the time with interesting music, I was riding the musical wave (so to speak) more then than thinking about where it was going.

Looking back and listening again to the new fully restored complete work on 2-CDs (an earlier release on CD tried to fit all into one disk and had to cut some of the movements), I see how it gave the world a good reason why improvisation should be considered a wide-open opportunity for whatever a musician might imagine, something calling upon roots of earlier music, or jazz, or contemporary classical, or whatever else one might be hearing in one's head.

And so it's been. Of course his solo piano concerts were and are a much more visible example of that. In those cases the identity of Mr. Jarrett is ordinarily so out front that there has been more imitation of what he actually does than perhaps a grasping of the new freedom from all stylistic constraints that were and are implied on an inspired evening.

The truth is, a musical artist should be free to express the self as she or he sees fit. Is it jazz? This is not a question that holds meaning in the widest sense. Improvised music may be called jazz and may well be firmly in the jazz tradition. Then there are other ways to go, outside of the vocabulary developed in the past 100 years.

This is what Keith Jarrett was doing especially well and especially profoundly on Hymns Spheres. It is music that by the nature of the instrument and Keith's response to it recalls sacred music from a long panorama of eras, beginning with the Baroque and climbing through the seminal French school of organists and so on. Bach, Franck, Widor, Tournemire, etc., all improvised a great deal on the organ. Most of the music is lost to us for obvious reasons--it wasn't until the recorded era that one could preserve it--but some of the compositions they wrote for solo organ showed the influence and feel of improvisatory practice.

The point though is that Jarrett was not doing something earth-shatteringly new when he sat down to the Trinity Organ. But it spawned some exceptional music, even for Jarrett. The two Hymns and the nine-part Spheres finds Jarrett in a triumphantly melodic and mysteriously exploratory mood. He gets uncanny sounds from the old organ that still haunt.

So perhaps that's all I will say about the newly re-released full set. It will appeal to the adventurous Jarrett jazz-side fans and anyone open to some beautifully ambient cathedral organ improvisations.

It's a side of Keith Jarrett you do not see much of--a brilliant side nonetheless. And the recording spawned in part a continued interest in new music improvisation that we can trace up to the present. It is one of the many releases ECM and Manfred Eicher have presented to us in forwarding an improv-new music nexus. It is one of the very best.