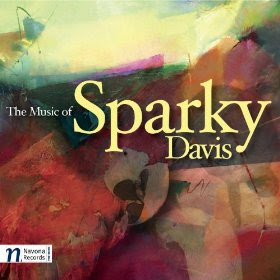 Sparky Davis composes music that some early modern American artists tended to go toward in the heydays of Harris, Hanson and Barber. It has a residue of romantic expressiveness, it is tonal but extended, and the linear working out of thematic melodic motives is especially pronounced.

There's an entire disk of his music out, understandably called The Music of Sparky Davis (Navona 5897). Two works are for orchestra, one for solo piano.

The Moravian Philharmonic Orchestra under Vit Micka or Petr Vronsky do a respectable job fleshing out the particulars of the symphonic works. Karolina Rojan lets us feel and appreciate the expressive thrust of the Fantasy Sonata.

"...and Our Last Waltz," and "Symphony in Bb" are distinguished by inventive thematic material developed in ways that have almost a conversational-poetic logic. The orchestration has a classic-romantic quality and the music flows effortlessly.

The piano sonata has an expressive modern-romantic chromatic-tonal elan to it. Again the motival development and flow make for an enriched and rewarding listening experience.

Sparky Davis may be a stubborn individualist, in that he thrives and works within a style that perhaps looks more backward than it upsets musical apple carts ahead. But he is very plausable and lucid in the universe he chooses to inhabit. And so one comes away from the experience with a pleasure that makes one wish to hear the music again. Thank you Sparky for that.