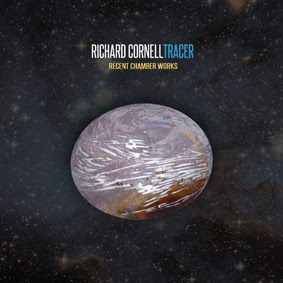 Richard Cornell is another somewhat new name to me. He composes music of a stirring modern sort, with a kind of motion and vitality that generates a good deal of ear-interest.

His sixth album, Tracer (Ravello 7869) presents four substantial chamber works, in each case recorded live. There is "New Fantasias" in four movements, "Tracer," "Images" in two movements, and "Acqua Alta" for solo violin, in two movements. The chamber orchestra A Far Cry handles the first work, Boston Musica Viva under Richard Pittman the middle two, and Peter Zazofsky the solo violin part on the last work in the sequence.

There is something post-Schoenbergian, post-Webernian to this music. It has the widely ranging melodic quality of the Viennese School, but the rhythmic quality is a bit more driving, more Stravinskian at times.

The performances are excellent, and the music is not so much derivative as extended, like a set of lucid dialogues on subjects others have handled before.

The program, I suspect, will appeal to all those who admire 20th century modernism and would like to hear development in the classic modes of its music. Richard Cornell has a genuine voice of his own in this stylistic universe. The album excels in bringing that voice to us in all its charm and eloquence.