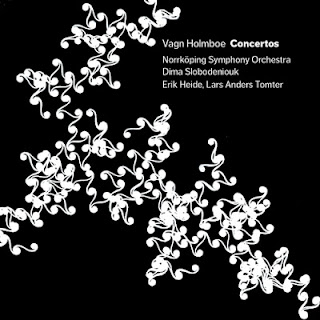 Vagn Holmboe (1909-1996) was the leading Danish composer of his generation, successor to Carl Nielsen, who produced a large body of works that bore his own stamp, and are becoming slowly absorbed and increasingly appreciated throughout the world. Three years ago (August 26, 2010) I posted a review of his complete String Quartets (see link on this page to the Gapplegate Music Review site), which I found quite impressive. Today we turn to a fine disk of three of his Concertos (DaCapo), performed by the Norrköping Symphony Orchestra, with soloists Erik Heide, violin, Lars Anders Tomter, viola, Dina Slobodeniouk, conductor.

These are works that have a great deal to recommend them, whether written rather earlier in his career as the Concerto for Orchestra, or towards the end, as the other two.

Holmboe writes music that belongs to the last century. The concertos are not as much neo-anything as following a personal muse. These works generally show a respect for classical forms but incorporate a thematic expressivity and folk and chromatic-harmonic elements not characteristic of earlier eras. Vagn Holmboe has his own way and the concertos are very inventive and well-wrought, requiring some time to digest and appreciate, but then rewarding patience with a world of music one is glad to linger within.

This is high-caliber music, showing the composer as a man of genuine talent and originality. The performances are pristine on all counts with excellent solo dynamics, nicely staged orchestral dramatics and a program that bears close scrutiny.