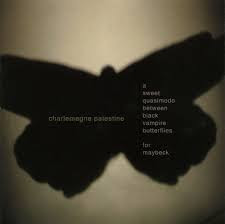 Charlemagne Palestine was one of the original minimalists, the trance minimalists, who like La Monte Young, early Steve Reich, Terry Riley, creates music of repetition that by virtue of the sound worlds crafted, gives listeners the opportunity to enter a kind of mental realm that is not akin to everyday awareness, but rather a heightened condition. Since the late '60s Maestro Palestine has been known for solo piano works that utilize often the sustain pedal and feature actively busy, shifting tremolo patterns on the instrument that simultaneously make for continual rhythmic patterns and a harmonic, ever-changing overall drone. He calls the technique "strumming."

A rather stunning example can be found on his concert recorded live at Maybeck Studios in 2006. A Sweet Quasimodo Between Black Vampire Butterflies for Maybeck (Cold Blue 0025) puts that 40-minute performance before our ears. Palestine holds forth on two Yamaha pianos simultaneously, doing what he does best, and doing it exceptionally well. Like much of his solo work, if not all, he occupies here a place somewhere between formalist new music and free improvisation.

Palestine creates a maelstrom of sound to transfix and transport your listening being. His recordings don't generally stay around long and since this one is one of his very best, grab it now and get into his world full-force. Recommended.