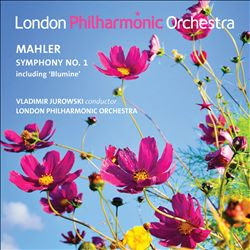 Over many years of listening I have become somewhat chagrined to realize that often for me the preferred version of a recorded work is the one I first heard, if that version found frequent eartime in my life subsequent to its purchase, and assuming that the version had something going for it in the first place. For Mahler's Symphony No. 1, that for me is a version that Sir Adrian Boult recorded with the London Philharmonic Orchestra in the early stereo days, 1958.

So when the London Philharmonic (for their LPO label) released a new version conducted by Vladimir Jurowski (LPO 0070), I thought it might be interesting to see how the same orchestra handled the work, as recorded live in 2010, some 55 years later!

There are a few obvious features that distinguish the two versions right off the bat. One is that Jurowski includes the fifth movement (second in sequence), known as "Blumine" ("Flowers"). It is lovely music, andante, lyric in a very Mahlerian way. True, Mahler cut it from the published version. Also true, the first symphony was greeted with derision at the time of its initial performances. Mahler, just beginning his symphonic journey, no doubt thought it politic to cut back on what for the era was thought too long, too eccentric, too inexplicably heteroglot in whatever form audiences heard it. In those days and with Mahler's increasingly lengthy symphonies appearing one after another, the composer sometimes only attempted to present a single movement of a new symphony in a program, fearing the public would not sit still for the entire work. It wasn't unusual at the time to break things up in concerts anyway. Nevertheless Mahler had many battles to fight both in Vienna and in Europe in his day, not only because his music was very different, but also that he was a Jew in a growing anti-Semitic environment, that as a conductor he was very much a perfectionist, that he did not always see things eye-to-eye with singers, management and audiences of the Vienna Opera where he became legendary yet controversial.

The First Symphony was thought very eccentric at the time it was first performed, and indeed it did not follow anything at all typical of post-Beethoven symphony sequencing. The fourth movement, a minor key version of what sounds initially like a folk dance, even perhaps a Yiddish "Frere Jacques," angered and mystified audiences. The combination of the unusual makeup of the movements and the very original compositional styling was widely panned. He decided to shorten the work. Long story short, conductors from that point forward have followed the printed version, omitting the "Blumine" movement. When Mahler's reputation rose steadily until a great flowering of popularity in the early sixties of last century on, orchestras still made of the First a four-movement work. Indeed there was little choice, since the movement was in fact lost until its rediscovery in 1966. I believe the first recording of all five movements was by the New Haven Symphony for Columbia's Odyssey label in the '60s.

At any rate some conductors refused to reincorporate it. Those who love Mahler (like myself) see no reason it should be excluded from a CD performance. If you find it extraneous, you can skip it! I think it adds to the music and the final movement revisits the theme again, so it clearly has an intrinsic place in the work as originally conceived.

The second quite obvious aspect of the Jurowski version compared with the Boult is the digital soundstaging. The orchestra comes through with a bit more transparency, the climaxes jump out of the speakers in a moving way, with a fullness that the early stereo analog recording does not quite match. The balance is at times subtly different--a harmonized trumpet call seems more in the distance in the latter version, for example, the strings soar at times in a more forward way than some of Boult's tutti interpretations/sound engineering. Other times the winds and strings differentiate themselves with a bit more resolve than the 1958 Boult.

For all that I must say that somehow Jurowski gives us a rather more heroic version, more Beethovian. There is a little less eccentricity, a little less sarcasm, a little less Yiddish-Austrian folksiness and more a Pastoral Symphony rusticity, and little less ecstasy perhaps than the Boult rendition. On the other hand there is a sort of noble, stately earlier Viennese handling of the climaxes on the Jurowski recording, to my ears. It may be a little less like Mahler might have conducted it (hear Mahler's performance score of Beethoven's 9th if you can find it--and you'll note that Mahler transformed Beethoven into his own image there, wonderfully so, and then you may grasp more vividly how his First is not especially Beethovenesque at root). But we should embrace multiple versions and there ultimately should never be only one way to perform a work.

It is a fine version all told, fully worthy of your attention, even if you have others. Perhaps in the very end I am used to the Boult version, have grown to love it, even over Bruno Walter's LP recording. But it is the one I heard so many times when first exploring Mahler. Fact is, Jurowski and LPO do a great job, and this has the Blumine movement in full digital sound. So don't hesitate.

Posted by Grego Applegate Edwards at 6:44 AM