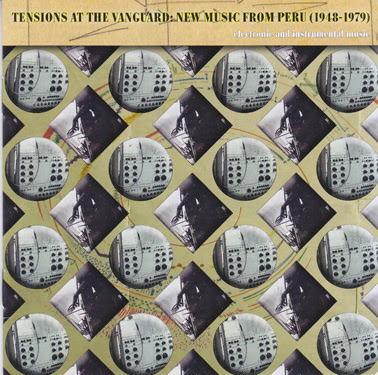 Peru as a center for avant garde classical didn't begin taking shape until World War II and its aftermath. Some composers escaped Europe and resided in Peru then. A few stayed. A prominent conductor, Theo Buchwald, took charge of the National Symphony Orchestra. Stravinsky introduced his music by concertizing in Lima. The National Conservatory of Music under Carlo Sanchez Malaga began training a new generation of composers. The group later called the "50s Generation" began a diaspora in search (essentially) of modernity.

It is with this background that we introduce ourselves to a fascinating 2-CD anthology of the period in Peruvian avant composition that followed, critical but not known much in North America-Europe. And so we have Tensions at the Vanguard: New Music from Peru (1948-1979), Electronic and Instrumental Music (Pogus 21065-2). It is a rather comprehensive collection of 13 works by as many composers, five for magnetic tape, two for orchestra, two for string quartet, one for solo piano, one for violin and piano, one for two pianos and contrabass, and one for solo violin.

There is so much music here by so many composers that sorting through can be a dizzying but rewarding task. Valcarcel, La Rosa, Bolanos, Casas, Aguilar, Vidal, Malsio, Pinilla, Alluaca, Garrido-Lecca, Asato, Iturriaca, del Pozo, composer after composer enters the stage with what is usually a fairly short work and goes his way. First time through your senses begin reeling. A few of the recordings are not of the very highest quality, but presumably that's because they are the ones readily available, and they are always clear enough to get a very good sense of the music.

In the end, nothing is lightweight. This is serious music, seriously good. The anthology does what it should: open you up to a musical universe you (or at least I) knew nothing about previously. The more you listen, the more you gain, the more you appreciate. Tensions at the Vanguard fills in a huge gap in our knowledge of modern avant garde music and fills it very well. This for most will be a major discovery. For those who know it will be an affirmation. Either way this is great listening, a wealth of music that for many of us will truly be NEW!