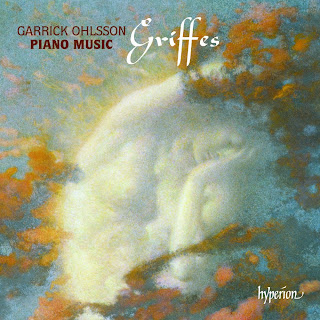 Charles Thomlinson Griffes (1884-1920) for a time was thought of as America's greatest living composer. But he was perhaps dubbed that by default. And his music fell into obscurity as an American School of composers began to be recognized by mid-century.

Griffes music, mostly the shorter works, has never quite left us. But the truth is that he doesn't get a lot of attention. His Piano Music in a new disk by Garrick Ohlsson (Hyperion CDA 67907) gives us 80 wonderful minutes with which to reconsider. Seven works or suites fill the disk and they are delightful, impressionist for the most part, and performed with a maximum of sympathy and sensitivity.

Was Griffes an original voice? Certainly not like Ives, Copland, Harris or a good number of others who came after. But he wrote what was in him and though his piano music may not always have the bold dash and liquidity of Debussy or Ravel, there are late romantic elements intertwined at times and there is strongly evocative, melodic-harmonic charm to be had in good measure.

Garrick Ohlsson does a beautiful job with the music. His definitive performances put the music in the best possible light. Truth is, after hearing this well-chosen set of gems I no longer feel that the music is in any way lacking. Not these pieces; not these performances. It's music of great beauty in the end. Who cares, after Ohlsson presents them, where Griffes belongs in some posterity? That's for others. We can revel in the sounds and get much of high interest regardless of his ultimate place.