If, Bwana, Red One 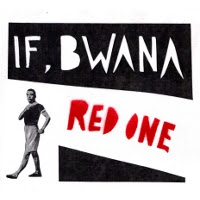 Almost nothing worthwhile retains exactly the mental picture you get of it on the first hearing, at least in the realm of the "modern." If, Bwana's new one, Red One (Pogus 21068-2) is no exception. First time through for me I knew the music was of interest. Only in subsequent hearings did that music come together in my head as a total presentation.

What we have are the compositions/sound assemblages of Al Margolis, six of them. All six were, based on what I am hearing, built up of different, distinct instrumental and vocal performances of a single performer or a duet between two performers. The artist(s) created sounds under Al Margolis's direction, and then Al assembled, edited, and collated those sound worlds into cohesive essays, thick sound clusters of chordal sustains and/or bursts of sound that ever flow and evolve, electro-acoustic music created out of live artists and their initial single-layered creations.

Each work has its own sound and logic, gained by creatively orche-strizing the initial sound moments. The first creates a universe of Nate Wooley's trumpet and Al Margolis's toy trumpet, the second from the singing and vocalizing of Ellen Band. Then there is Monique Buzzarte's trombone, Leslie Ross's bassoon, the fifth a duo electro-orchestration of Lisa B Kelley's voice and the flute of Veronika Vitazkova. And the final work builds from Al and his toy trumpet, this time by itself, to complete the sound cycle.

The making of it is something of fascination, but it is the completed results that stay with you after you've heard the album a few times. Each work-within-the-work hangs together yet relates to the others and constructs a complex whole when the entire sequence is heard.

You end up like someone visiting a planet of sound in some far-away exotic land. You cannot live there permanently, but every visit becomes increasingly like a vacation you take again and again because the locale gives you pleasure and re-creates you and your listening being. That's a good feeling and Red One gives it to you in a strong way. Listen.