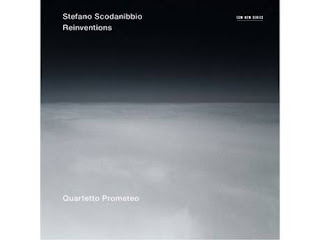 Where human creativity and musical acumen are concerned, there never will be the last word (read note) on anything, so long as we still live. That was brought home to me on the recent release of music by contrabassist virtuoso Stefano Scodanibbio (1956-2012), namely his Reinventions (ECM New Series B0018083-02) for string quartet. Besides working with composers like Riley, Xenakis, Cage and Nono on music that extended the possibilities of the contrabass, he was a composer in his own right. Reinventions looks to a full spectrum of string resonances and playing methods in the reworking and re-timbred recomposition of Bach contrapuntal music, Spanish classical guitar works and popular Mexican songs.

As Arvo Part discovered, the judicious use of string harmonics can extend radically what string groups sound like. Scodanibbio in these arrangements for string quartet, played by the very capable and sympathetic Quartetto Prometeo, in essence dissects every intervallic overlapping of every sequence in time and carefully reconceives the sound worlds possible.

Webern years ago did something analogous for chamber orchestra in a reworking of Bach. In his case he made pointillistic part shifting a regular metered event and articulated every Bachian note for a different instrument or combination of instruments. Here Scodanibbio limits it to the four string instruments in the quartet. The comparison is fascinating to me, but what matters is how Scodanibbio's timbre manipulation dexterity and clear musical vision allows him to rework melodic-harmonic sequences and make of them something much more 21st century than the music with conventional articulations.

The music is mostly taken slow, deliberately, so that every nuance becomes clear. It's entirely lovely in result, aurally adventurous yet sonically accessible to all ears. Quartetto Prometeo take pains to achieve the uncanny sounding result Scodanibbio was after, and they very much succeed. And of course the ECM spaciousness is perfect for this music. This may be a sleeper. It's a sleeping giant in a way. It has magic built-in. And it will charm the most reluctant modern-pomo sceptic.