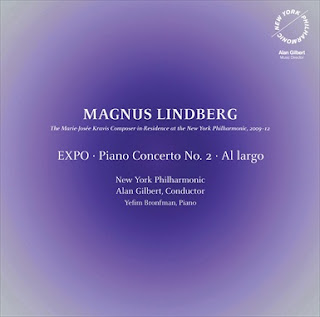 Scandanavian artist Magnus Lindberg was Composer in Residence with the New York Philharmonic for the years 2009-2012. During that time he composed a number of works for the orchestra, at least three of which were given their premiere by the Philharmonic under Musical Director Alan Gilbert.

A CD is now out of those three compositions, EXPO, Piano Concerto No. 2, and Al largo (Da Capo 8.226076). Gilbert, the NY Philharmonic and piano virtuoso Yefim Bronfam give us a lingering, unstinting look at the three works and everybody comes out a winner. Composer, artists, producers-engineers and listeners.

Lindberg is a modernist, yet has the musical color of the Scandinavian symphonists of years ago. The Second Piano Concerto sounds pretty monumental. The solo part is heroically difficult, with the cascading drama of late romantic concerto parts, but a much wider, thicker tonality. The orchestra jousts with Bronfam, contrasts him, completes him in masterful ways. Lindberg has orchestrational mastery in him and it comes out continually in this music. There are moments as I listen when I think, if Sibelius or Neilsen were alive today, they would love this, or even write something like this. Not exactly, though, Lindberg is very much himself.

The concerto makes for essential listening. "Expo" and "Al Largo" serve as excellent end pieces in the program. They have something excellent of their own to offer, but somehow the concerto, especially with the extraordinary Bronfam as protagonist, dominates in one's memory after the music ends. On the other hand, "Al largo" has its own originality and weight but ideally should be heard a number of times to get acclimated. It is an orchestral tour de force of its own.

Bronfam, the New York Philharmonic under Gilbert, and the audio production team all do a terrific job getting this music into our hearts. Magnus Lindberg is most certainly a heavy! You do not want to miss this if you want to know what a modern piano concerto of this decade can do for you!