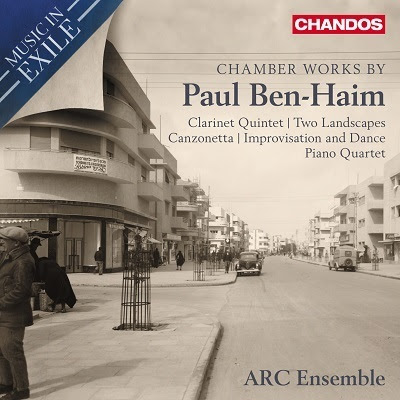 Chandos begins what seems a very promis- ing series of albums entitled Music in Exile with a compil- ation of the Chamber Music (Chandos 10769) of Paul Ben-Haim (1897-1984). Nee Paul Frankenburger, Ben-Haim was assistant conductor under Bruno Walter and Hans Knappertsbusch before fleeing to Palestine in 1933 and making Tel Aviv his home. The ARC Ensemble gives us impressive versions of works written both before and after exile.

Ben-Haim's music is very well-crafted, modernist neo-classic, with a shade of neo-romanticism. Parallels in the level of thematic invention and development might be found in contemporaries Weill and Hindemith, meaning that he was a composer of great ability. A penchant for the minor key, forays into dance forms and the occasional direct use of Hebrew themes distinguish the composer as immersed in Jewish musical heritage, but not in any exclusive sense. He has a musical personality all his own.

The works, sequence and performers are as follows:

The quality of works and performances make this inaugural volume an auspicious event. Ben-Haim is a major artist and the ARC Ensemble and soloists see to it that we savor the music for its considerable merit. 20th century musicophiles should not miss this one. It is a landmark!