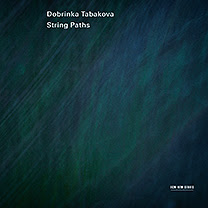 Whatever doesn't kill you, the saying goes, makes you strong. Except music. Good, interesting, exceptional music makes you a different person, if there's enough of it at least. But it is something other than strength that it leaves you with (thought there may be nothing weak about it). Bulgarian-born, London-bred composer Dobrinka Tabakova, and her album String Paths (ECM New Series B0018364-02), most certainly leaves you with something after you've heard it. I don't mean strength, particularly. Maybe it's courage, the courage to believe in the power of present-day music and its life-affirming qualities.

But not the power that already exists, the power to energize those who already listen to, understand and love modern concert music. More like the courage to play her CD to people who don't think they like the "modern," the crowds of people who have subscription tickets to a concert series and promptly walk out when the modern piece is being played. I doubt that any of the works presented on this disk would prompt that reaction from such people. But it's not because it, say, sounds something like Beethoven, i.e., that it's neo-romantic, because it is not. And it's not because it is in any way watered down, lacking in musical substance and content, because that's not the case. At all.

It's tonal, which for most untutored listeners is what they can understand. It isn't minimalist. What I suppose you could say is that it is neo-early. That in itself is a contradiction, I suppose, but there is a lyricism that is not romantic in her music. Like Arvo Part's, her music has a strain of the pre-classical, not always so much contrapuntally so (though there is a bit of it), but in the trajectory and lift of its melodic arc.

And no, her music does not sound like Part's. The five works presented here have their own sometimes pastoral, sometimes folk-like, always lyrical mastery of string writing. The "Suite in Old Style" has Rameau in its roots, so that gives a bit more of a baroque feel, but not in any obvious way, because it transforms to Tabakova so fully that you do not anchor in another time period but stay fully in the now. And that can be said for all the works.

This is music with ambience (and with an ECM sonic ceiling that certainly lends the music even more spaciousness than it already would have with other production values applied). It is music with soaring string lyricism and a tenderness and unfeigned sweetness that is more "early" than 19th century. It has a rusticity that paradoxically is also quite sophisticated. The string writing (and performance) makes exceptional use of the sonority of both solo and ensemble possibilities, not so much through effects as through natural resonance.

Every work is a bit of a gem. The configurations shift yet there is a continuity. So you are almost unaware at first that you are going from a string trio ("Insight"), to solo cello and chamber string orchestra ("Concerto for Cello and Strings"), to violin, accordion and contrabass ("Frozen River Flows"), to viola, harpsichord and chamber orchestra ("Suite in Old Style"), to string octet ("Such Different Paths").

The soloists, mixed chamber instrumentalists and the Lithuanian Chamber Orchestra are all right where they need to be.

So for someone like me, yes, the music gives me courage to recommend the present-day offerings to a total novice. And so I do. But the music of course does much more than that. It pleases, presents a sumptuous sonic repast of choice explorations, and (forgive the coinage) it conviviates!

Tabakova has brilliance. She crafts a music of sweet light. Listen to it!