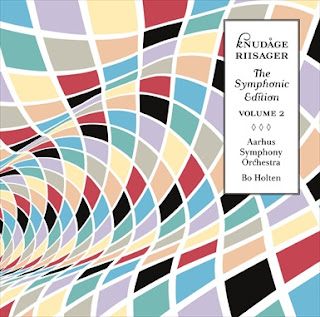 As anybody who reads my blogs recognizes, I cover both assimilated "names" as well as those less well-known, essentially because I am convinced that in 100 years some may have great credence among musical cognoscenti. Of course not all. But I feel that it is in part my duty to listen to as much "good" music coming our way and then to cover things that are worth considering on any number of levels.

In that light Knudage Riisager (1897-1974) was not a composer I knew very well when I received a copy of his second volume of The Symphonic Edition (Dacapo 8.226147). It's a collection of world premiere recordings of his symphonic works from the 1920s and 1930s, as performed abily and convincingly by Bo Holten conducting the Aarhus Symphony Orchestra.

A Danish composer with something of the pluck of Nielsen and orchestration sense of a Sibelius, he is front and center in five substantial works for the volume. All have a weighty seriousness though also a kind of effervescence that brings them out of late romantic territory and more into a Scandinavian tonal modern-impressionist realm, though please understand these labels are just ready approximations.

The liner notes quote a critic as remarking on the premiere of his Third Symphony that Riisager proffers a "music of surprise and caprices." I can see how in 1932 that might have been the experience. Looking back with so many years between then and now, the caprices are absolutely a factor, but surprises perhaps less--only because the syntax of music has had so many permutations since then, it's harder to be taken unprepared. It is on the syntax level though that Riisager gives originality to the proceedings. No individual theme or orchestral motive is so distinctive as to characterize a melodically unforgettable moment (and some have a definite Nielsenian flavor to them), yet it is the juxtaposition, the endless asymmetrical discourse that has novelty and appeal, even today.

As one listens repeatedly to "T-DOXC" (1926), "Symphony No. 2" (1927), "Concerto for Orchestra" (1931), "Primavera, Concert Overture" (1934), and "Sinfonia (Symphony No. 3)"(1935) one is left with a feeling that here was a composer that produced very solid scores in that era, that had a certain way about him, but had not yet attained the sort of brilliance of some of his more illustrious forebears. Now I do not know his later work, so perhaps there are further developments which bring full identity to his music.

In the meantime this is music worth hearing, of especial interest to Scandonaviaphiles and those who like to become acquainted with less-known composers of the early modern period. I am glad to have it and will continue listening with absorption. Perhaps you will too.