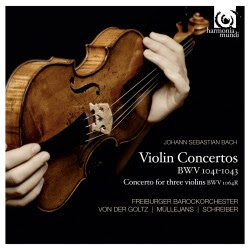 The best music of Johann Sebastian Bach has in it "Bach code" that's capable of reiteration a virtually limitless number of times. Bach himself would be astounded to hear it, probably, if he were alive today. You get the feeling he wrote his music on an "as needed" basis for the situations and occasions called for, that otherwise it was simply a matter between him and his maker. Be that as it may--centuries later we encounter performance after performance and still remain steadfast, dedicated to the idea of his genius. There's something generative, some code in the music of you will, that when conditions are right produce new versions (performances) that generate the excitement we've been feeling for a long time now. Of course it's not just any old performance, but one that recaptures the sequences in ways that give us pleasure, that brings things out anew.

Such a version is certainly generative on the recording for today, the Freiburger Barockorchester, Petra Müllejans, Gottfried von der Goltz and Anne Katharina Schreiber: Bach's Violin Concertos BWV 1041-1043 & Concerto for three violins BWV 1064R (Harmonia Mundi 902145). Schreiber plays the solo violin part for the BMV 1041-1043; she is joined by Müllejans and von der Goltz for the three violin work. Keep in mind the latter work survives in the scoring for three harpsichords and has over the years been adapted to three violins as well. It's no matter because both versions are wonderful.

The Freiburger Barockorchester does baroque music with the emphasis on period accuracy, in the instruments and instrumentation, in the way of articulating. Schreiber and the other soloists take the same approach, as you can understand. So the four works, great to have in these performances, are not in anyway romanticized, sentimentalized or otherwise made into something formerly "contemporary" in a non-baroque way. A hundred years after the peak Beethovanization-of-Bach years, an authentic "early music" version is nearly the norm, or at least it is for me. That doesn't mean one should weed through your Bach stacks and eliminate "non-authentic" versions. Of course not. It means that the music is profoundly generative. What coming generations will do with the music does not especially concern me, except that there will be a place for multi-versioned excellence come what may.

And excellent is what the Freiburger versions are in every way. The exciting but period violin solos, the orchestral balance and baroque resonance, the frisky brio of the overall approach, all top-notch and beautiful to hear. And I've heard countless versions of these works. This stands among the very tallest trees. Needless to say the baroque instrumentation gives you a sweetness and balance the way Bach intended the music to be heard. So it is a cornerstone recording. Each part comes through with clarity and balance and so then does that which I call generative! A version to have and exalt over...