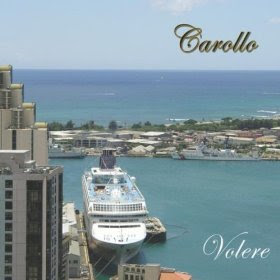 We last encountered American composer John Carollo on this blog with two really nice CDs of his orchestral works (see July 18, 2011 and November 25, 2011 posts). He's back, with a CD of chamber works which is somewhat different but equally worthwhile. The CD is called Volere (Musica Baudino MBCD 002).

Carollo excels at creating highly evolved modernist chromatic-expanded chamber music. It is music of firm sinew, taut muscle, strong bones. Like in his orchestral music, Carollo (to mix the metaphors) draws bold, hard-edged melodic outlines. But unlike the larger ensemble pieces, he understandably relies less on color and more on black and white contrast, like a finely finished drawing in charcoal as opposed to a full-paletted, extensively worked-over oil painting.

He gives us Two "Metamorphoses" for Solo Viola, the solo Piano Suites Nos. 2 and 3 (the second for two pianos), "Eterna Riconciliazione" and "Volere" for violin and guitar, three Piano Etudes, and the Trio for Piano, Guitar and Violin.

Performances are completely idiomatic and very well realized. The recorded sound is very good for a self-released opus such as this.

In short, we have an excellent sampling of John Carollo the chamber music composer. It is music of great power and seriousness, strongly constructed, rewardingly contentful. This is a music creator of much character and originality. Recommended.