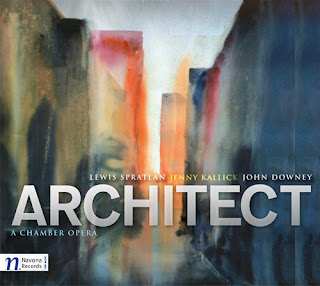 When something is as interesting, as good, as contemporary, as unexpected as Architect (Navona 5905), you don't just rattle out a few lines and expect to do it justice. But you cannot write a book about it, either, at least not now.

So let me begin, and try to give the work its due. It's a chamber opera, a collaboration between Lewis Spratlan, who wrote the vocal and chamber group sequences, and John Downey and Jenny Kallick, who wrote the electroacoustic music sequences. Ms. Kallick also wrote the libretto. Mark Lane Swanson is the music director for the performance here recorded.

There is an audio CD with the entire opera; there is a DVD that includes that performance and provides visual still/video images that greatly enhance the narrative experience, along with the libretto as subtitles (if desired).

The inspiration for the opera was the architect Louis I. Kahn (1902-1974), a major figure who created buildings that took advantage of light and location-landscape. But the narrative thread of Architect centers around a mytho-poetic vision of the origin of the centrality of ritual space as embodied in buildings that captured light and ritual fire. And how they have centerpoints of human wonder and the celebration of existence. Iconic figures of the Trickster, the Creator-Spirit, the Universal Woman, the Architect, the Engineer have important singing roles. The libretto emphasizes mystical poetic declamations about the struggle to appropriate fire from the gods, the making of buildings as part of human-cosmic self-actualization. That's my take on the overall thrust of the story. It's heady and very resonant with the music (and vice-versa).

A collaborative opera with three composers is unusual, of course, but Architect does not have a cobbled or pastiched feeling to it. On the contrary the chamber music/singing segments and the electro-acoustic segments meld together as the expression of a unified and dramatic libretto story-line so that you do not get and feeling of partition.

The music is modern contemporary and extraordinary. Spratlan's chamber orchestra/vocal parts work quite well and have expressive clout. The electroacoustics from Downey and Kallick heighten the experience artfully.

Video images on the DVD add another dimension: buildings in ruins, natural settings, stunning architectural structures, everything works together to create depth and mystery. You go away from this opera with a feeling of wonder. What is light to us? Fire? Why have we erected monumental architectural structures for so many countless centuries? What is it to be a brilliant architect and why are they heroic, almost god-like figures in our various civilizations?

The performances are very good. Singing first-rate; instrumental parts played with spirit and care. Architect is a meditational monument in itself. It is a living, modern archetype, an opera of great depth, beauty, expressivity, fully of our time and yet somehow timeless. It could be counted as a major achievement of our era some day. In the meantime all with an interest in creative concert developments must hear this!