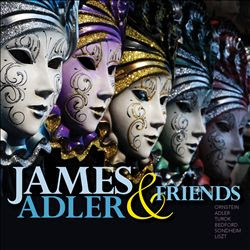 James Adler, composer, pianist, and associate of like-minded folks. James Adler & Friends (Ravello 7871) brings him together with a good piano and an interesting series of somewhat brief works by himself and others, notably Leo Ornstein, Paul Turok, Seth Bedford, and Liszt. The music is modern post-romantic expressionist, or in other words it bypasses pointillistic Darmstadt or aleatoric sorts of modernism for rubato cascades of Rachmaninoff without the Rachmaninoff. If that's not exactly it, description-wise, think of what Leo Ornstein was up to and much of this music is in that realm, no less the Ornstein piece. Tenor saxist Jordan P. Smith joins Adler for the latter's "Reverie, Interrupted" (2009) and Malcolm J. Merriweather adds his baritone vocals to Adler's "A Song of the Road" (2010), otherwise it's just Adler as pianist-interpreter of his and other's works.

The inclusion of Liszt "Mephisto Waltz No. 1" is unexpected but it IS great music and Adler gives us a composer's view, emphasizing things that hit him about the piece while in no way attempting to compete with the master pianists that have performed this piece before him.

Beyond that this is music to capture your ears. It may not bring about the raising of the Titanic (and what would?) but it does captivate and enchant.