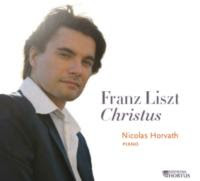 Of all the virtuoso pianist-composers who followed in the wake of Beethoven, Franz Liszt no doubt did the most to impress upon the public and musicians alike the idea of the solo pianist as a Promethean figure, an orchestra unto himself, a being of expressive technical wizardry. Chopin and Schumann set the stage. Liszt delivered the most consistently and overtly heroic countenance. Others followed. Even today, in the music of such different composer-improvisers as Keith Jarrett or Cecil Taylor as well as modern classical composers for the solo piano, you can find something of the Liszt charisma, though it explains not all that much perhaps in the individuality of artists, the notes themselves or the general nature of the execution-attack--I am thinking especially of Cecil Taylor in that. Nonetheless Liszt provided the most influential model in his all-inclusive expressive pianism.

The piano-as-orchestra is most obviously heard in his many transcriptions for solo piano of otherwise orchestral works. And quite naturally it can be heard in many of his fully mature piano compositions. It his last years he worked at incorporating Gregorian Chant and the choral contrapuntal way of Palestrina into his expressive palette for a number of religious-themed works. Christus, conceived of as a full oratorio for choir, organ and orchestra, was his best-known such endeavor. The 14-movement work was also worked out in a version for choir and piano alone, and another more obscure version took eight of the movements and reworked them for solo piano. Nicolas Horvath recently gave a world-premiere performance of the full eight movements in concert. The recording at hand [Christus (Hortus 100)] gives us the Horvath version as first recording (three movements of the eight have never been recorded previously).

It's the story of the life of Christ as a symphonic poem. Each movement expresses Liszt's musical impression of an episodic chapter of the story. And subsequently the music covers a wide spectrum, from Gregorian chant derived counterpoint to chorale-like pieces, contrasted vividly with Liszt's later symphonically evolved romantic style, from ruminative quietude to roaringly faux-violent expressionism. Here you experience later Liszt in all its moods, the Promethean pianist in all his moods. A few movements sound, as the liner notes remark, quite avant garde in chromatic expressiveness.

The end experience is quite moving and orchestral in breadth and expanse. Nicolas Horvath handles the music with all the versatility, sensitivity, passion and technical heroics the music requires. It's most definitely a revelation to hear the complete eight-part piano version performed in its entirety. And Horvath triumphs in so doing! Definitely recommended, for all Lisztians, solo piano aficionados and those who want to experience the bridging of romanticism into modernism. Fabulous!