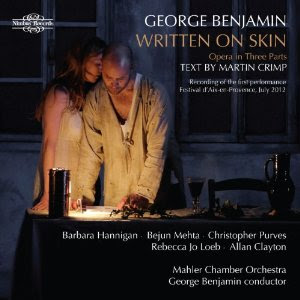 The Middle Ages was a psychic maelstrom. Yes, it was an age of faith. In Europe Christianity was central to most people's way of life. There was also a revival of learning, of course. But to anyone who has experienced Bosch, the Bruegels and some of the imagery contained in Illuminated Manuscripts, you know it was an age of dark thoughts. Hell and the Last Days seemed close, much closer than it does to us in our secular age. Both the Old and New Testaments have some very dark passages, and it seems the Middle Ages knew them much more intimately, much more literally than we do today. In everyday life there was widespread, endemic everyday violence. The persecution and torture of those outside the orthodox political and religious mainstream was all-too-common.

The darkness of the Middle-Ages soul comes through hauntingly, domestically, in George Benjamin's singularly strange and dramatic opera Written on Skin (Nimbus 5885-6 2-CDs). This is the recording of the first performance, at Festival d'Aix-en-Provence, July 2012. The cast of singers, Barbara Hannigan, Bejun Mehta, Christopher Purves, Rebecca Jo Loeb and Allan Clayton is quite excellent, as is the Mahler Chamber Orchestra conducted by the composer.

The text/libretto is central to the singularity of this opera. It was written with a poetic bareness and vivid matter-of-factness by Martin Crimp. I would first off venture to say that I have not experienced such a moving combination of libretto-story and musical expression since Wozzeck and The Devils of Loudun.

A central protagonist is the figure of the "Protector" who rules over his wife Agnes and apparently his feudal subjects with tyranny, yet he professes also a religious purity. The story begins when he commissions a "Boy" artist to create an illuminated manuscript, literally "Written on Skin." In the course of its creation the inner torments and unbalanced excesses of the Protector and the pointed revenge Agnes takes upon her Protector/Tormentor through the Boy involve a bringing of inner thoughts, dark visions to the outside, a making visible of an infernal series of visions if you will. The skin in the end is much more than the manuscript; the horrible world created in the process is brought to the outside, to the "skin" of the protagonists as well.

The story has the hallucinatory darkness of a Medieval vision of hell on earth. Text and music conspire together to create an unforgettably vivid drama. I'd venture to say it is along with the previously reviewed new opera Architect (see July 24, 2013 posting) a landmark work of our current era. As a bonus the 15-minute Benjamin work for piano and orchestra, "Duet," rounds out the second disk in fine fashion.

Written on Skin illuminates a world paradoxically without much in the way of light. In the end no-one wins, yet in the process a brilliant work of art is created. It is a story of contrast, of despair, yet of singular beauty. Do NOT miss it if you are in the modern camp and/or wish to experience contemporary musical drama at its very best!