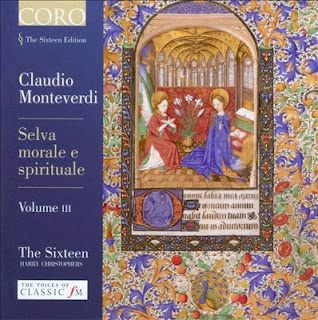 What is it about the music of Claudio Monteverdi (1567-1643) that stays with you long after the music is gone? The text answer is that he was one of the very most important composers of the early baroque. But his vocal music sounds like no other, so it is not just a matter of paving the way, he is his own way. There is an expressivity unparalleled in his era. He has a sweetness in his music that is almost a romanticism, like Rameau after him. There is counterpoint but a throughness that parcels out into musical prose in different ways ways than a Bach or a Handel.

You can hear Monteverdi at his best in the Selva morale e spirituale, Volume III (Coro 16109) which The Sixteen, a wonderful choral group, has put out of late. It is music for soloists, choral group and often a small chamber orchestra of ten players. The Selva were published towards the end of Monteverdi's lifetime and remain some of his very best sacred music.

The aggregate, amassed singers and instrumentalists that make up the Sixteen for this project sound wonderful, perfect. Director Harry Christophers gets a judicious balance between expression and form, between intimacy and impact. I have not heard the first two volumes as yet, but if they flow with the impressive directionality of Volume III, they are seminal, indeed. Recommended for anyone who loves Monteverdi or those who do not know his music, and anywhere in between. In any event this is top-notch and very satisfying.