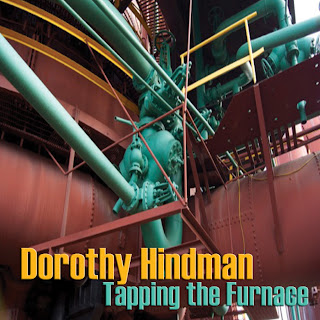 Dorothy Hindman writes music that forges a distinct modern classical-avant jazz nexus. In other words there is something of the latter sensibility in her musical vocabulary much of the time, and that something fits in seamlessly and expressively to the whole. Tapping the Furnace (Innova 848) presents her music in a variety of chamber settings, with a concluding work for symphony orchestra.

There's much of interest on the disk. "Drift" has a vibrant, rhythmically lively ambiance. "drowningXnumbers" takes amplified cello as the medium and maps out distinctive abstractions with nicely colored textures. "Fin de cycle" sounds freely rubato with some virtuoso music for piano and digital media (i.e. electronic enhancement).

The title work "Tapping the Furnace" is a virtuoso workout for a text-reciting percussionist playing an extended drum set and doing some wonderful interlocking motival-rhythmic figures on the tom-toms especially. It is rare to have such a well developed sense of abstract melody present for a drummer and Stuart Gerber rises to the occasion with a very nice performance. It remains after repeated hearings one of the best such works I know.

Solo classical guitar gets a nice turn in a well-constructed work, "Needlepoint." It has that contemporary classical guitar-meets avant jazz melodic-harmonic sensibility going for it. What's especially nice with this piece, and indeed the music on the CD as a whole is that Ms. Hindman finds her own particular way of capturing "what's in the air" right now. And she has found her own voice to express it.

The final work "Magic City" brings her inventiveness to bear on the full symphony orchestra. Hindman's rhythmically alive music and her motif developing prowess gets a full large-scale realization in this very captivating ten-minute work. It has a lyric sensitivity and a nice use of instrument section interplay that make me wish I could hear more of her orchestral work. For now it is certainly very good listening.

So there we have it. Dorothy Hindman is a voice, an original voice that comes through consistently on this program of her works. She has allowed us to hear six very idiomatic and inventive pieces and I certainly look forward to more! In the meantime I do recommend you give this one a hearing, especially if you like your modernity with an avant jazz inflection, but over and above that it will bring lots of rewards to anyone interested in contemporary music.

Posted by Grego Applegate Edwards at 6:33 AM