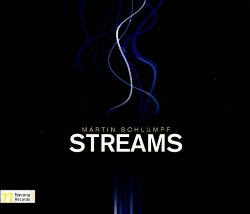 And now...more! Speaking of the avant classical-jazz nexus I've got a pretty darn brilliant one today that combines heroically hip solo parts with orchestral power. Martin Schlumpf is the man, Streams (Navona 5918) is the CD, and some kinetic magic is the end product. This is dynamism at your service, music that moves brightly and lithely from sector-to-sector, building ostinatos and/or creating linear momentum and chromatic harmonic thrust.

There are three major works on the disk. Each features a different soloist (or two) in a concerto setting. "Mouvements for Piano and Orchestra" brings in Martin Levicky, "Waves for Solo Cello, Trumpet Obligato, String Orchestra and Computer" features Petr Nouzovsky on cello and Marek Vajo on trumpet, and "Streams for Clarinet, Bass Trombone and 17 Instruments" spotlights Matthias Muller on clarinet and David Taylor on bass trombone.

The solo parts are rather wild and wooley and the orchestral interactions have logic and force. There is a slight minimalist element to be heard in the ostinatos but otherwise it is a matter of through-composed orchestral "killer-dillers" (as the old big band players used to call it) with real bite. The soloists and orchestra do more than perfunctory service to the scores. They shine. The Moravian Philharmonic handles the first two works and the newly formed PARMA Orchestra the last.

I was especially intrigued with "Streams" for the out-jazz intricacy of the lines as played by Muller, Taylor (David is probably the premier modern jazz bass trombonist and he shows you part of why on this work) and the orchestra. I won't try to describe it. Suffice to say that the very first time I listened I remarked to myself, "holy cow!" or something similar. Eric Dolphy in orchestral heaven? Not exactly, but you get the idea I hope.

The program gives us some very fine scores by the Swiss composer. There is fire and passion in the performances and it all truly captures some of the essence of modern orchestral and avant jazz intertwined. Brilliant!

Posted by Grego Applegate Edwards at 6:50 AM