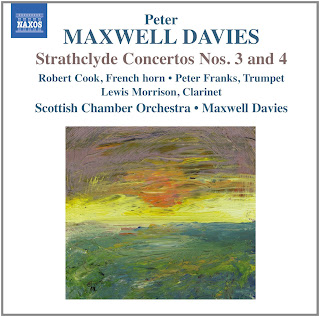 Thanks to Naxos' ongoing project of issuing and reissuing a comprehensive selection of the music of Peter Maxwell Davies, I am coming to appreciate the impressive breadth and quality of his work. I've covered a few of his later symphonies on these pages (type his name in the index search above for the postings). Today it's a re-release of the first recordings of his Strathclyde Concertos Nos. 3 and 4 (Naxos 8.572353), previously issued on Collins Classics sometime in the '90s.

These are impressive works, impressively performed by soloists and the Scottish Chamber Orchestra under the composer. The Strathclyde Concertos were commissioned and premiered by the orchestra. The performances are authoritative.

Concerto No. 3 features Robert Cook on French horn and Peter Franks, trumpet. It is the extroverted virtuosity of the horn/trumpet parts that carries the day, with modern, angular, acrobatic dynamics and a beautifully conceived orchestral melange. Concerto No. 4 is no less vibrant, with clarinetist Lewis Morrison taking the central role with a puckish demeanor and the orchestra unfolding a cornucopia of colors and tonal blends.

Both works are singularly sublime in their own way, proceeding from the classical form of concerto give-and-take and making of it both something thoroughly of our time and distinctively Maxwell Davies in its overall thrust--in other words not neo-classical, but neo-Maxwell Davies. Whereas the later symphonies often have a kind of soft focus to them, these concertos have a hard-edge in their melodic-harmonic outlining.

This is music of boldness and robustness, virtuosity and a striving outward. It is hard to imagine better performances and the works fully satisfy while bringing to our ears a most engaging side of the composer in a serious yet at times playful frame of mind. A major addition to the Maxwell Davies oeuvre!