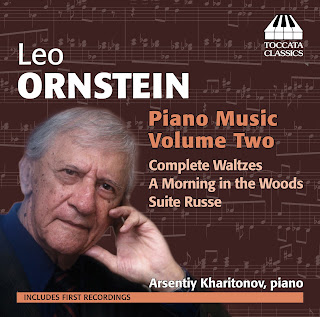 As one continues to listen to music throughout life, there are moments of surprise, usually pleasant, that can occur from time to time. One such came about when I listened to and reviewed Leo Ornstein's Piano Music Volume One (see post, October 22, 2012). Ornstein came to a certain amount of notoriety as an early modernist in the US in the second and third decades of the 20th century. The LPs I had managed to find years ago focused on that period, with some intriguing music but nary a hint that there was anything else. It turns out that Ornstein led a long life (1894-2002) and continued to compose. There was much more to hear! That continues to be so with the release of Leo Ornstein's Piano Music Volume Two (Toccata Classics 0167), a revelation in its own right.

Ornstein, both Jewish and Russian, spent his childhood in his native land, coming to New York in his early teens. He gathered attention as one of the proto-avant composers on the scene and then fell into obscurity. But as Volume Two makes even more clear, he kept going. Arsentiy Kharitonov brings passion and dash to the works represented here and they are sometimes fiendishly difficult. In their best moments they show a composer of extraordinary originality, combining Russian-Jewish roots with a touch of neo-impressionism, and a well-wrought modernism that sometimes startles with brash dissonance and kinetic fire.

The centerpiece of the volume is a wondrous series of waltzes (s400-16), 17 in all, composed between 1958 and 1980 but somehow recalling an earlier world, both of the avant early years and the late romantic Euro-Russo ethos, as if seen and refracted through the prism of time. They are marvelous, as is Kharitonov's acutely multi-stylistically sensitive performances. They occupy more than an hour's time in the program and make for essential Ornstein, well worth experiencing!

"Suite Russe" in seven parts takes us all the way back to 1914. It shows an Ornstein thoroughly steeped in impressionist-romantic ethno-melodic vibrancy, very beautiful and memorable.

The last is a glimmering impressionist "A Morning in the Woods" from 1971, showing the sensibilities of someone as if emerging from a time-machine to bring us genuine expression from an era now long gone.

This is a beautiful disk, revealing for us an Ornstein we have never fully appreciated, perhaps until now. A master.