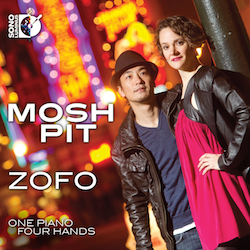 The sound of music for two pianos is different than that of music for one piano and four hands. It means of course that actual unisons are not in the offing, that the full range of the pianoforte is always at hand, and so the sound has its own shadings.

The sound factor comes out front in dramatic ways for ZOFO's recording Mosh Pit (Sono Luminus 92167). It's a six-work program of widely contrasting fare, brought to you in sterling sound by the four-handed behemoth Keisuke Nakagoshi and Eva-Maria Zimmermann. This Sono Luminus release comes as a regular CD and a surround-sound Blue Ray disk, so you can hear the duo in super detail or normal state-of-the-art stereo.

In the end of course it's the music and performance that count first off. As with the notion of a mosh pit the artists bring together a widely contrasting program of early modern and newer works, all played with pretty exciting dash and sensitivity to motive balance.

So we have Gershwin's "Cuban Overture," Nancarrow's "Sonatina," Barber's "Souvenirs," then on to the present with John Corigliano's "Gazebo Dances," Allen Shawn's "Three Dance Portraits," and Paul Schoenfield's "Five Days from the Life of a Manic Depressive."

The music has drive and there are connecting links in the form of music that has roots in the dance, from Cuban-derived, ragtime, boogie-woogie and stride to some allusions to modern rock. It's a running thread present at times in the forefront only to recede, then come back again later. And in that way (Nancarrow being a direct link here) it does remind at times of the old player piano rolls which in fact often arranged the music in essence for what would take four hands to play. That is a pleasing reference that comes to bear at times but of course that is not to imply that ZOFO sound in any way mechanical. Far from it.

This is a talented pair of players who lock into the music as one hydra-being of coordinated sound. ZOFO sound great, the program is refreshing and the sound stands out. Outstanding for all that. Very captivating and so very nice to hear. Recommended!