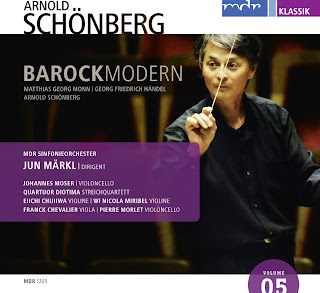 Both Arnold Schoenberg and Anton Webern did recomposing and re-orchestrations of baroque compositions. Both created fascinating music that allowed you to see for a moment the composer's mind at work. Volume Five of the Barock Modern series (MDR Klassik 1205) gives us three such works by Schoenberg: Matthias Georg Monn's "Concerto for Harpsichord and Orchestra," adapted and recomposed as a cello concerto by Schoenberg in 1932; Handel's "Concerto Grosso, op 6, no 7" freely interpreted by Schoenberg as a "Concerto for String Quartet and Orchestra" from 1933; and the "Theme and Variations op. 43B" composed by Schoenberg in 1943. The latter is not a baroque-based adaptation as much as it is a wholly original work, but it nonetheless fits the program well as music steeped in tradition, a most creative use of hindsite to the Schoenbergian ethos.

This recording is realized with care and sympathy via the sensitive conducting of Jun Markl. The MDR Sinfonie Orchester with soloists Johannes Moser, cello, and the Quatuor Diotima String Quartet do an admirable job with the scores.

There are fairly large orchestral forces in play throughout. The orchestrations are both more late romantic (almost Mahleresque) than not at times and also have spots of brilliant color as you might expect from the composer of "Pierrot Lunaire."

The melodic motives often remain contrapuntal but there are shifting groupings of instruments and cell-like motif re-divisions more typically Schoenbergian than baroque. Of course this is as we would wish. The point is not to remain authentic to the period as it is to transform while retaining baroque essences in various ways. After hearing the two transformed works, the "Theme and Variations" takes on a different light. We hear in the variations the same brilliant handing off and cellular restructurings of the original theme.

In the end this a vibrant Schoenberg, tonal, accessible, yet fully modern. It's probably a great volume to start with if you are slightly modern-shy and wish to experience Schoenberg in stages, as it were. But the music stands on its own as something listeners on any or every level can appreciate. The performances are quite good and one goes away from the program with the urge to hear it again, and perhaps again. Very much recommended.