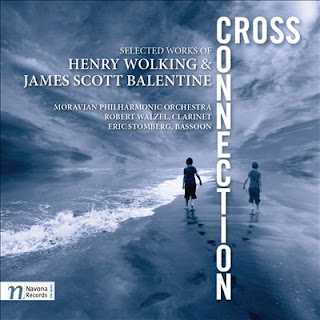 Some lesser-known names today in contemporary composerdom: Henry Wolking and James Scott Balentine. They share a friendship . They also share a similar musical outlook which can be heard in a program of original works that fit together nicely on Cross Connection (Navona 5903). Both American composers have an eclectic yet distinctively melodic flair to their music, and the three works have in common an expression of the relations between life, love and the musical arts.

Henry Wolking comes to us with two works, James Scott Balentine one. Wolking's "Gone Playing" is about epitaphs and the life and death of those they are written for. It's a vibrant work that features clarinet (Robert Walzel) in a prominent role against an extroverted string orchestra backdrop (Moravian Philharmonic Strings under Per Vronsky). It has jazzy elements and a rather cheerful demeanor given the subject matter. And it pleases with some beautifully lyrical, melodically articulate passages.

The symphonic work by Balentine that concludes the CD, "Dun Eideann Blogh" brings Walzel back on clarinet along with bassoonist Eric Stomberg for a very pleasingly lyrical work that represents a recollection of times spent in the company of family and friends. The Moravian Philharmonic are put to excellent use (again under Vronsky) in a modern, excellently orchestrated score that has playfulness and some compelling modern counterpoint-interplay that keep one's interest. It sounds better to me each time I hear it.

All-in-all this is quite rewarding music. I was especially impressed with the two orchestral works, but the string quartet has a refreshing quality when heard between the orchestral poems-essays. Nice music!