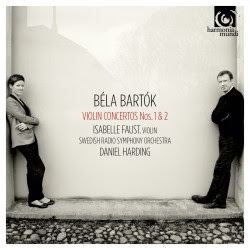 Bartok's Second Violin Concerto is a favorite with music lovers. His First is less well known. It was lost and only rediscovered after the composer's death. Plus it was written 30 years before his 1930s No. 2, so it goes back to the early days of his composing career. Isabelle Faust, a violinist with whom readers of this blog will be well acquainted, went back to the original manuscripts to make sure the performance edition she used was truly the authentic version.

The result is Isabelle with the Swedish Radio Symphony under Daniel Harding in a new recording of the two concertos together (Harmonia Mundi). It is manna for Bartok enthusiasts; indeed beautiful music for anyone with ears.

The first concerto reflects Bartok's love for a young violinist of his acquaintance at the time, and so understandably has some tenderness and a romantic quality. It is fascinating music regardless, not flying quite to the heights of the second, but sounding ravishing enough with Ms. Faust and the Swedish Radio Orchestra giving it a passionate reading.

The second concerto has some of the most sublime and moving moments of any 20th century violin concerto, and that's saying quite a bit when you think of how many beautiful scores were created last century. Isabelle Faust is wholly simpatico with the music, reaching a contemporary high water mark in versions of the work, with a passionate attack that integrates the technical difficulties of her part with the broad sweep of the music. She sounds otherworldly. The Swedish Radio Symphony do a good job with Daniel Harding at the helm sounding fit and fully committed to the demands of the music.

The second concerto in Ms. Faust's hands reminds us that great music takes humanity well beyond the rather mundane biological animals we all too often are. It is what transcends all, that recreates us for a time as beings that dwell in the clouds.

Go there with this recording!