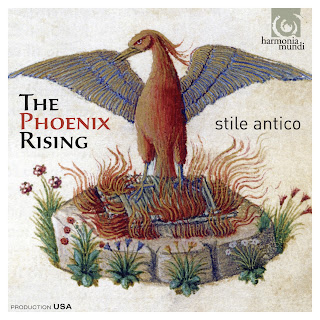 The early is in the late, the late in the early. To hear Stile Antico's vocal performances of English Tudor Church music is to hear something very old yet somehow right for our ears today--not in terms of the actual musical sequences so much as the vibrato-less voices in their bell-like purity. All this can be heard in an excellently subtle-ecstatic manner on Antico's new release The Phoenix Rising (Harmonia Mundi 807572).

Early Music sounds current in its own way partially because there are some composers today, Arvo Part for one, that have been inspired by the sound of it all. That doesn't mean there is a close fit between something like Tudor Church Music and something in the Neo-Early vein. The Tudors represented here were masters of the long flowing contrapuntal line, the close harmonies, the various intervallic motions up or down according to what they thought was "right," these are things special to that period and style.

And the anthology at hand gives it to us in a great wealth of expressive voicings. The centerpiece is William Byrd's "Mass in Five Parts," but it is equally present in the short works by him, Tallis, Morley, Gibbons, Taverner, et al.

It's music that gives you the chills, for its ancient voices speaking clearly to us today, for the sheer beauty of its note choices and for the gracious transparency of Stile Antico's outstanding musicianship.

If you could have only one choral recording representing this style and time, this probably should be it. But if you have a wealth of early music in your music library, this will be most welcome to you, too. Stunning. Stunning all around.