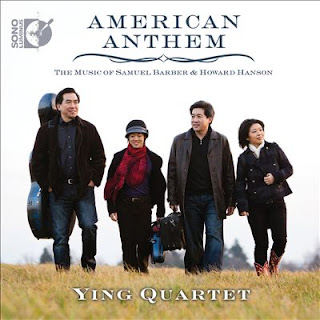 Samuel Barber and Howard Hanson, 20th Century North America's principal neo-romantics. Their music transcended the style so that it was more their music than romantic music per se, but nonetheless they belong together as very different peas from the same pod, so to say. The Ying String Quartet have pulled together some gems the two created over the course of their careers--for string quartet plus a few guests. The result is the well-considered American Anthem (Sono Luminus 92166). It comes in a two-disk set, as is more-or-less standard with Sono Luminus releases, as a regular CD and a surround-sound Blueray disk.

These are works that helped define the respective composers. For the first time we have the complete four-movement version of Barber's op. 11 Quartet (with the first recording of movement four) and it contains the original version of Barber's "Adagio," which is perhaps his most famous piece, haunting in its wistful melancholy. Hearing the full four movements for the first time has a revelatory quality. Then there is his very first opus, the "Serenade for String Quartet," certainly worth hearing. "Dover Beach" in its version for quartet and baritone (Randall Scarlatta) has a lingering expressive beauty. That concludes the Barber portion of the program, and if that's all there was I would be satisfied.

But there of course is more. The two works by Howard Hanson, the "String Quartet," op 23 and "Concerto da Camera," op 7 (the latter with the addition of piano [Adam Neiman]) fleshes out our picture of the composer--he is generally more well known for his symphonies--and provides a good foil for the Barber works. As a bonus the contemporary Randall Thompson's "Alleluia" (as arranged by the Ying Quartet) concludes the program on an interesting note.

The Ying Quartet play the music like they were born to it, with expressive depth of feeling yet a keen ear for the many dynamic nuances the music offers. They are first-rate and so is this recording. A fine showcase of music generally not often enough performed, presented with sheer artistry.