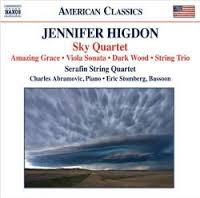 These days composer Jennifer Higdon gets lots of attention. Her works are frequently performed. Of course like anybody there was a time when that was not so. She started out with the first works, a very promising student of the music, and worked her way into an individual style and widespread recognition bit by bit.

The Serafin String Quartet along with Charles Abramovic at the piano and Eric Stomberg on bassoon bring us an interesting selection of early to relatively early chamber works on the new release Sky Quartet (Naxos 8.559752). In it we hear Ms. Higdon immersed in poly-stylistic expression with surprising maturity and budding mastery.

Her lovely quartet arrangement of "Amazing Grace" (1998/2003) sets a tender initial mood that contrasts dramatically with the four movement "Sky Quartet" (1997/2000) that has both lyric archaicist neo-romantic lilt and dynamic modernism at its core, alternatingly. It depicts the panoramic sky of the Western US in its ever-changing moods with vivid, singular tone painting.

The 1990 "Sonata for Viola and Piano" brings a late-romantic expressiveness to bear in the slow movement; more animated and playful in the "Declamatory" finale. Here is a Higdon perhaps more influenced than influence, but inventive and captivating nonetheless.

"Dark Wood" (2001) is a quartet for bassoon, violin, cello and piano. It has great rhythmic verve, a mellow bittersweet rhapsodism and a dark, woody earnestness that brings us a solid look at the fully realized Higdon at her best.

The earliest piece of the batch, her "String Trio" of 1988, shows a modern, widely harmonic palette and an inventive imagination already then at work.

The performances match the scores for dedicated singleness of purpose. Ultimately a picture emerges of a bright young musical personality with an idiomatic feel for chamber music and string writing, a smart and warm musical demeanor and a stylistic expansiveness that signal and prefigure the ever-more satisfying works to come. There is no feeling of the sophomoric in these pieces. And they have great charm and lyric power.