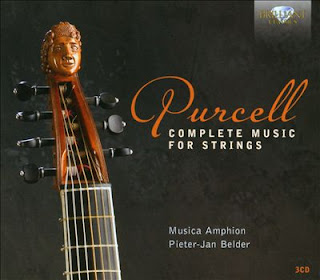 Henry Purcell was a baroque master, unquestionably. Yet his music does not get as much exposure as, say, Vivaldi, who has some superlative works, but perhaps is less consistently inventive taken as a whole. Part of that is Purcell's tragically short life and subsequently smaller output. He died at aged 36. Be that as it may we have a treasure trove of Purcell on the new set Complete Music for Strings (Brilliant Classics 94619) as played by Musica Amphion, Pieter-Jan Belder, director.

The three-CD set covers the "Twelve Sonatas of Three Parts" (1683), "Ten Sonatas in Four Parts" (1697) and the "Fantasias," each filling its own disk. This is a Brilliant Classics budget series release and the price is fantastic.

But even if it weren't the music and performance would make it worthwhile. The works are played with a stately, sweet elegance in period style on what sound like instruments from the era. All is taken sans vibrato, as is not only appropriate but beautifully sonorous and musically transparent.

And the music! These are excellent examples of Purcell as master of the long contrapuntal sequence. The thematic material is fully suited for such treatment and too there is never a banal moment in the three-hours give-or-take of music represented here. Purcell's masterful crafting of interactive part writing is a marvel to hear and the Musica Amphion instrumentalists give us definitive period performances.

You can not go wrong at this price. Or any price. Very much recommended.