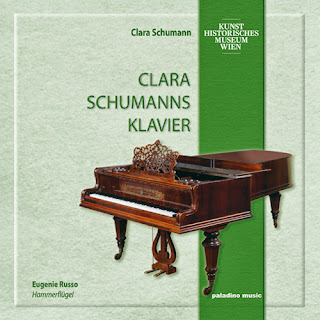 In the pantheon of immortals up until recently there have been few women composers. Hildegard of Bingen seems to have been enshrined now. Then there is Clara Schumann (1819-1890). Wife of course of Robert, she was known as a pianist of first-rank. But she also composed some fine piano music, a great part in her younger years before domestic duties and eight children took her away from her music. What she left behind is something anyone who appreciates the period can revel in.

For those who seek to experience her compositions first-hand there is an excellent new release devoted to them, sensitively and poetically played by pianist Eugenie Russo. The CD is entitled Clara Schumanns Klavier (Paladino Music PMR 028). It is a remarkable combination of a completely sympathetic artist and a marvelous instrument of the period, a Johann Baptist Streicher & Sohn grand, manufactured in Vienna in 1868 and played by Clara Schumann in January 1870 for the opening of the Small Hall of Vienna’s Musikverein.

It is not as delicate sounding an instrument as you might have with pianos made earlier in the century. The upper range has a bit more projection and the lower one is nearly as robust as a good modern piano. But there is a definite sweetness to the sound that you don't hear from modern instruments. It complements Clara's music very well, matching her probing introspection with a sound that does not overpower.

The program is an excellent assortment of Clara's works, from her Piano Sonata to some of the best of her intimate miniatures. Chromatic, expressive, this is romantic solo piano at its very best. I can think of no better way to hear it all than on a period instrument such as this, in the hands of Eugenie Russo.

Enjoy this one without hesitation.

Posted by Grego Applegate Edwards at 6:17 AM