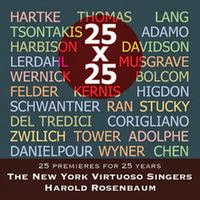 The New York Virtuoso Singers under Harold Rosenbaum had a great idea on how the celebrate their 25th anniversary as a performing group. They commissioned 25 composers to write a short choral work, then performed/recorded those works in two concert settings earlier this year.

The resultant two-CD set is now available for us to hear, aptly titled 25 x 25: 25 Premieres for 25 Years (Soundbrush 1027). They chose their composers well. Each contributes a work of value and impact, covering the contemporary choral spectrum with a vast panorama of styles and moods. There are some names well-known to the modern music enthusiast; others are not as familiar, at least to me. But all have something worthy to say. Some of the better-known composers represented include David Del Tredici, John Harbison, Shulamit Ran, John Corigliano, Jennifer Higdon, Yehudi Wyner, William Bolcom, Thea Musgrave, Joseph Schwanter, David Lang, Joan Tower, Ellen Taaffe Zwilich, Roger Davidson, the list goes on.

In the end we have a rich treasure of new choral works, beautifully performed. The experience of listening is a fundamental pleasure and a true voyage of discovery. With such a wealth of new music, it takes a bit of time to assimilate. But then all gradually comes alive for us. It is a true event, a milestone of what is happening now, 21st century choral music at its very best and in all its varied glory.

You are in for a treat!

Posted by Grego Applegate Edwards at 6:19 AM