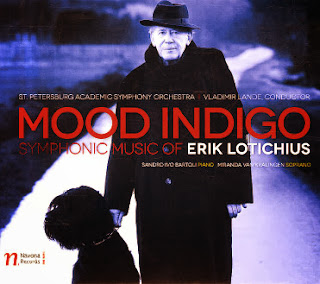 The story of Erik Lotichius (1929- ) is at first a sad, but in the end a happy one. He wrote his first symphonic music when he neared the age of 30 and continued to compose throughout his life. But performances were not frequent for him, recordings even less so. His style, the closest lineage member perhaps being George Gershwin, was not in an avant realm and so he did not find himself in great demand.

Fortunately Navona Records discovered him and agreed to record some of his music. By that time he was seriously ill. The works on CD and a DVD about Lotichius are available in the set Mood Indigo (Navona 5913).

The St. Petersburg Academic Symphony Orchestra under conductor Vladimir Lande does full justice to the music, which for the CD consists of three multi-part works of some length and a short coda-like piece. They are "Variations and Finale on 'Mood Indigo'," "Concerto No 1 for Piano and Orchestra," "Four Songs on American Poetry," and the succinct "Ragtime for Orchestra," bringing us nearly an hour of prime Lotichius.

The Variations are of course based on one of Duke Ellington's most famous melodies. The Piano Concerto follows in sequence. They are quite jazz flavored and well wrought. The jazz element is something akin, as I have alluded, to what George Gershwin favored and the era when he produced his most well-known symphonic works, though the composer also notes the influence of Dave Brubeck in the Concerto and yes, there is also some of that. The former of course does not mean Lotichius is a Gershwin ringer, far from it. He works his own style out beyond mere influence, coming up with original music that nonetheless bears the stamp of that time. Sandro Ivo Bartoli plays the piano solo part with grace and a dynamic flair.

The Four Songs have a jazz-cabaret flavor. Miranda van Kralingen is the vocalist on these symphonic songs. She may not have been quite the best choice as there are vernacular elements with which she does not sound especially comfortable. Opera I am sure she does well, but alas not these songs. Nonetheless the music comes through fully in spite of it all and so nothing is lost, really.

The Ragtime has spirit and a liveliness that marks a fitting close to this program of music.

In the end it is a good thing to hear Maestro Lotichius's works and that's what it is all about, of course. He is a composer who deserves the attention he is finally getting, now that stylistically anything goes. This is music that should find a wide audience, music that charms and interests, comes though with a clarity that has as much musical logic to it as it does passion. Well worth hearing!