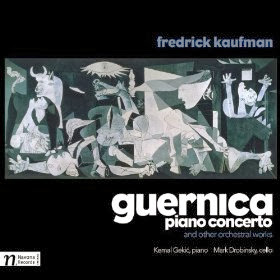 There are composers that begin a work or conceive of their music from a position of strength, with a clear feeling, a clear idea of what they want to do. Then they go about doing it from a special inner place. Other composers, other works are written from perhaps a more exploratory mind-set. Fredrick Kaufman, in his Guernica Piano Concerto (Navona 5924) would seemed to have worked in the former state.

It's a concerto based on Picasso's masterpiece, Guernica, a painting devoted to expressing strongly and poignantly the horrors of war, most expressly the horror of the Spanish Civil War, which took place between Franco's Fascist-supported troops and Spanish Loyalists in the '30s. Picasso created a painting that depicted a panorama of pain and suffering, a masterpiece of anti-war expression with few equals in the history of art.

Fredrick Kaufman has created a nearly equally powerful work for piano and orchestra. The CD at hand today gives us this work in an excellent performance by the Czech National Symphony Orchestra, Marcello Rota conducting, Kemal Gekic playing the piano part. In is a three-movement work of great modernist power, strongly dissonant and dynamically forcefull at times, quietly despairing, mournful and in the end transcendent. It is a work all interested in modern large-scale classical music should certainly hear. This version seems sure to be the benchmark performance against which others will be compared and to which others must live up to. Harrowing yet very beautiful.

On the disk is another seminal work by Kaufman, his "Kaddish" Concerto for Cello and String Orchestra, a work widely performed since its introduction into the repertoire, a kind of memento mori in memory of the composer's parents, at once both somber, kinetically eventful and expressively moving. The Czech Radio Symphony under Carlos Piantini, Mark Drobinsky, cellist, do this work full justice.

Finally a more dream-like, natural sort of modernism prevails on the colorfully crafted Seascape. It gives us a refreshing contrast from the preceding works and shows another side of this important composer. The Czech Symphony Orchestra under Richard Hein bring out the salient qualities of the work quite nicely.

In the end we have a most impressive three-work portrait of the composer. Works and performances are exceptional. This is one anyone interested in what is happening today cannot afford to miss. It is not music of compromise. It IS music of brilliance!