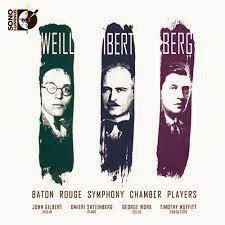 When three works work so well together that their inclusion on a single album gives one a kind of encapsulation of a style-period, then that CD is worthwhile for that very reason, if not others as well. That's how I feel about the disk set Weill-Ibert-Berg (Sono Luminus 92161). As with many Sono Luminus releases, this one has a regular CD for two-channel mixes and a Blue-ray disk for the 5:1 versions.

Each work is scored for chamber orchestra and soloists. Each is a gem of early modernism. They are Kurt Weill's "Concerto for Violin and Wind Orchestra, op. 12," Jacques Ibert's "Concerto for Cello and 10 Wind Instruments," and Alban Berg's "Chamber Concerto for Piano, Violin and 13 Wind Instruments." Timothy Muffitt conducts the Baton Rouge Symphony Chamber Players for these performances. The soloists are John Gilbert on the violin, Dmitri Shteinberg on piano, and George Work on cello.

I'll admit I've heard more rousing versions of the Berg, though in some older recordings that may not even be available at this point. But on the whole these are well defined, well recorded versions of works that go together excellently. They each have an almost ecstatically liberated feeling to them, as composers of that era took advantage of the new modernist ethos and the increased expressive freedom. And the three composers were important practitioners in the new style. The Berg is a masterpiece, the Weill belongs in in its company and the Ibert is quite worthy as well. All keep each other's company like three old friends enjoying an evening together, so sympatico with one another that the conversation flows pointedly forward with a good deal of impactful content and real style and grace.

The performances are spirited and well paced. There may be others available that have a slight edge, but the grouping together of the three on one disk makes for a most satisfying listen. I was unable to audition the 5:1 versions as I do not have Blue-ray capability, but I can well imagine that they add significantly to the aural staging of the music. In any event the stereo version has excellent sonics in itself.