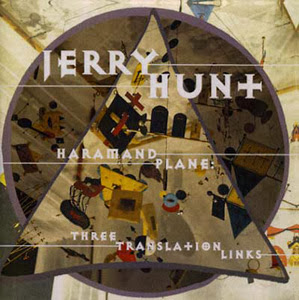 Jerry Hunt constructs involved electro-acoustic music assemblages that associate with visual complexes and are activated via the gestures of the composer-performer. That's as close to a nutshell description as I can get after reading the liner notes to the CD Haramand Plane: Three Translation Links (Pogus P21069-2). The three variants of the work were produced in 1993 and were originally released on What Next? Recordings. This is a reissue. For the record the three segments are called, respectively, "Chimanzii: Link (1)," "Chimanzii: Link (2)," and "Chimanzii: Drape: Link."

My first impression of this three-part assemblage is that it might be the music a bee would put together if he or she were a bee-composer-artist. There is a number of motif samples sourced from strings that sound hive-like. Beyond that these are quite interesting soundscape structures that show a kind of organic continuity that have an almost orchestral quality.

They are otherwise not easy to describe. They have various transformed oscillating trilling bee-buzzed tones more than noise-pitch constructions. It is quite unique and I cannot say I have heard anything quite like it all. The overall effect is mysterious and very musical, a series of related electro-acoustic tone poems if you like.

Those with an avant sense of adventure will find it fascinating. It is easy to listen to and rewarding.

Posted by Grego Applegate Edwards at 8:22 AM