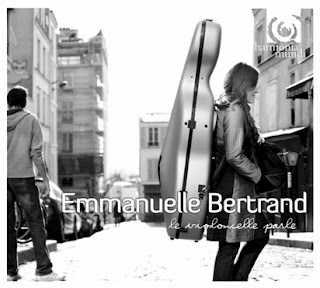 I have heard and been impressed with cellist Emmanuelle Bertrand on a number of recordings (and reviewed at least one on these pages). But it is only on hearing her unaccompanied solo CD le violoncelle parle (The Cello Speaks) (Harmonia Mundi 902078) that I realize the full extant of her artistry. The CD/DVD set was released several years ago (2011) but of course it is as relevant today as ever.

Her performances of the works are no less than superb. Her incredibly beautiful tone, especially in the lower register, her technical prowess, intelligent interpretive acumen, and her magnificent expressivity put her at the very top of the pack, a cellist for now and for the ages.

Listen to the work by her pianist partner Pascal Amoyel. It is about those who suffered in Auschwitz. The Semitic dance passages and the part for singing voice and cello are absolutely haunting, supremely transcending and compassionate in Ms. Bertrand's hands. So too the Kodaly, an extraordinarily demanding work she plays with such artistry and skill that the work opened up for me as if for the first time.

The DVD is moving, revelatory, a testament to her love for the instrument, for music, for the works she performs here.

In every way this is a recital that stuns in its excellence. You must not miss it!