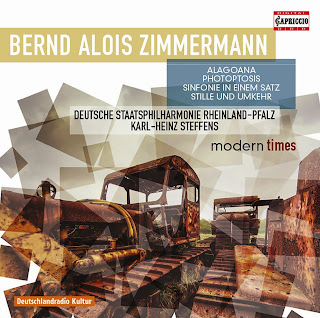 Some of the high modernists from last century have basked in relative obscurity since their deaths. One who should be more widely heard is Bernd Alois Zimmermann (1918-1970). His music has excellent craftsmanship and inspiration. He was notable in his incorporation of modern jazz into his music. He is most remembered for the opera Die Soldaten, but there is much in addition to appreciate.

A good start with that is available in a new anthology of his orchestral works, Modern Times (Capriccio 5213). The Deutsche Staatsphilharmonie Rheinland-Pfalz under Karl-Heinz Steffens cover four works here, written between 1927 and 1968, and a fine job they do with the scores. The liners make note of Zimmermann as a kind of outsider, in that he was never an integral member of the Darmstadt School of Boulez and company or any other group of composers, but instead went his own way. This may in part account for his relative obscurity, but his music puts him at the forefront in terms of its bold daring and its original stance.

The four works represented on this CD are not well known but fully worth hearing. They include the five-movement ballet "Alagoana: Capriches Brasileiros" written sometime in the 1940s, the "Sinfonie in einem Satz" composed between 1947 and 1953, a later work, "Photoptosis," from 1968, and the earlier 1927 opus "Stille und Umkehr".

These works generally give us a very extroverted, full, rich sound that has symphonic impact and generally none of the pointillism of Webern and the Darmstadt School. In this way he approaches the orchestra more typically in sections, which comes out of the heritage of romanticism. The melodic-harmonic thrust is altogether high modernist, however, at the edges of tonality and on to the more atonal end of modern compositional syntax. Yet he is more overtly expressionist than many of his contemporaries.

It is music of complexity and drama, something of real worth. The open modernist listener will likely revel in this music as I did. It is not music that can be fully grasped in a single listen, understandably. Zimmermann captures some of the turmoil of the century with an excellent sense of the orchestral forces available to him.